Plastic litter is the most visual indication of the pollution of our rivers. Eight million tons of plastic enters the ocean each year, much of coming from river systems. Awareness is growing on how this is impacting our rivers, oceans and wildlife, but a lot of plastic still ends up in watercourses.

Join us in the front line to fight the plastic problem in our rivers. Litter picks are still vital to fighting this issue, without picking up the litter that is already out there, we risk it grinding down into small fragments that we can’t yet get rid of.  Last year, local Rivers Trusts held more than 550 litter picks and we were lucky enough to have had the support of over 1200 volunteers. So put on your wellies and join us at the EPIC project clean up the new Sompting Brooks.

For more information on the EPIC Litter Pick and Our Plastics campaign contact Alistair Whitby at Alistair.whitby@oart.org.uk

Research shows that our waste can double during the Christmas period, and most of it is plastic from gift wrapping and packaging. We can make the most of the festive season without the mountains of avoidable waste often generated at this time of year. Glittery or shiny wrapping paper might look appealing, but every year it creates a mountain of waste as it  is non-recyclable. The UK uses 227,000 miles of wrapping paper each year – enough to stretch nine times around the world – alongside 40 million rolls of plastic sellotape!

So this Christmas, ditch the plastic wrapping paper and opt for recyclable brown paper, magazine paper or stylish reusable fabric wraps. Post a picture of yourself using a recyclable option on our social media channels (@Epic_Sompting or @Epicsompting1) for a chance to win a beautiful WragWrap set donated to us by www.wragwrap.com.

Action for a Plastic Free Christmas

When plastics break down due to exposure to water, sun or other elements they can break into tiny pieces – most of them too small to be seen with the naked eye. These small plastic fragments have been found virtually everywhere, from the deepest ocean trenches to the Arctic and in increasingly in our waterways, air, soil and the food we eat. Once plastic enters an organism it can bioaccumulate as it travels up the food chain to a top predator, e.g a whale or a human. Over half of river insects have been found to contain plastic.

Say No to Single Use

We know that this is easier said than done but reduce and reuse as much as you possibly can. As consumers, we all have a part to play in reducing the amount of plastic that ends up in our rivers. To have the greatest impact, we should be using less plastic by choosing alternatives where possible, or by reusing the plastic items we already have. Single-use plastic is nearly always unnecessary and there are now a multitude of alternatives.

Actions to Reduce Single Use Plastics 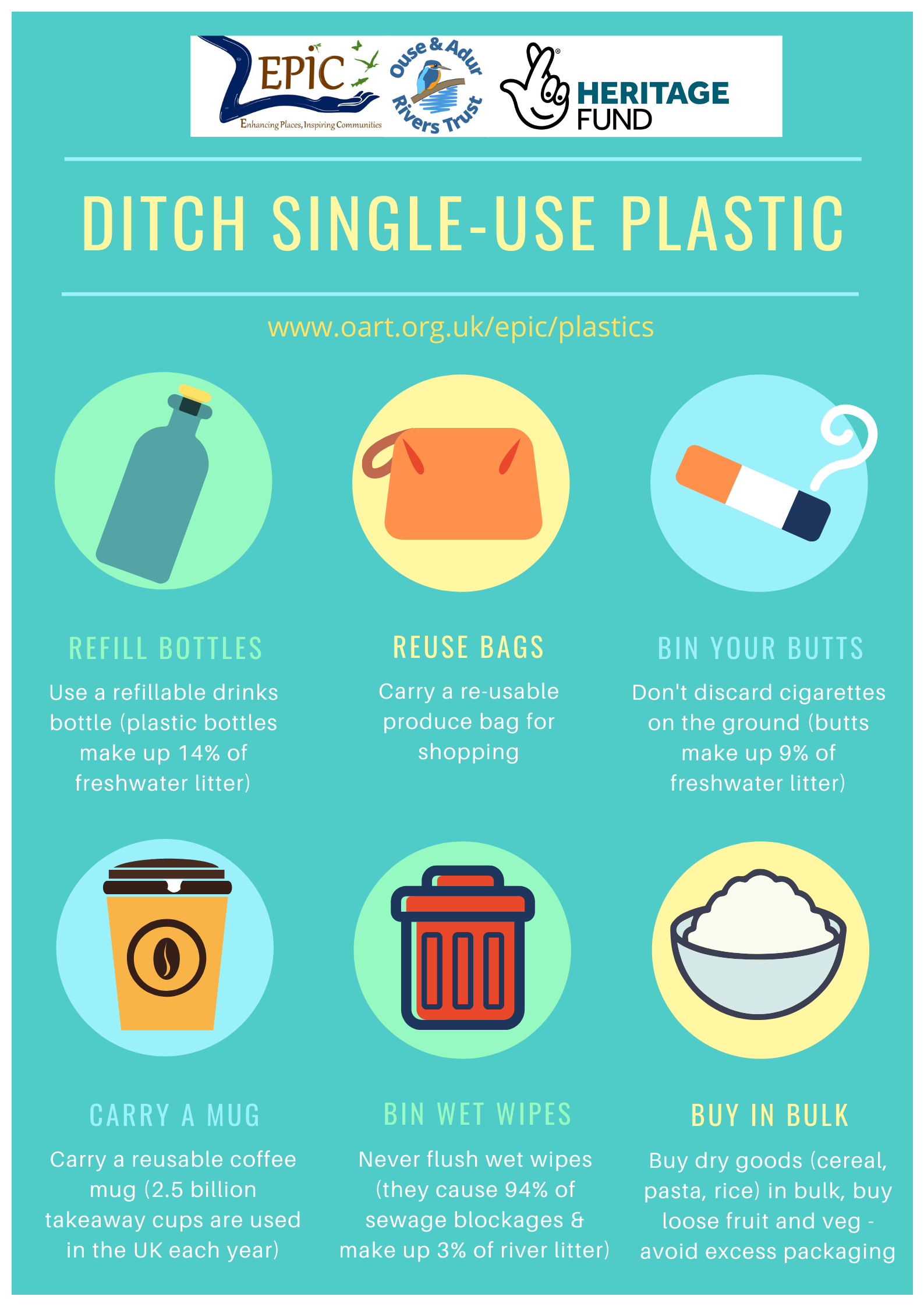 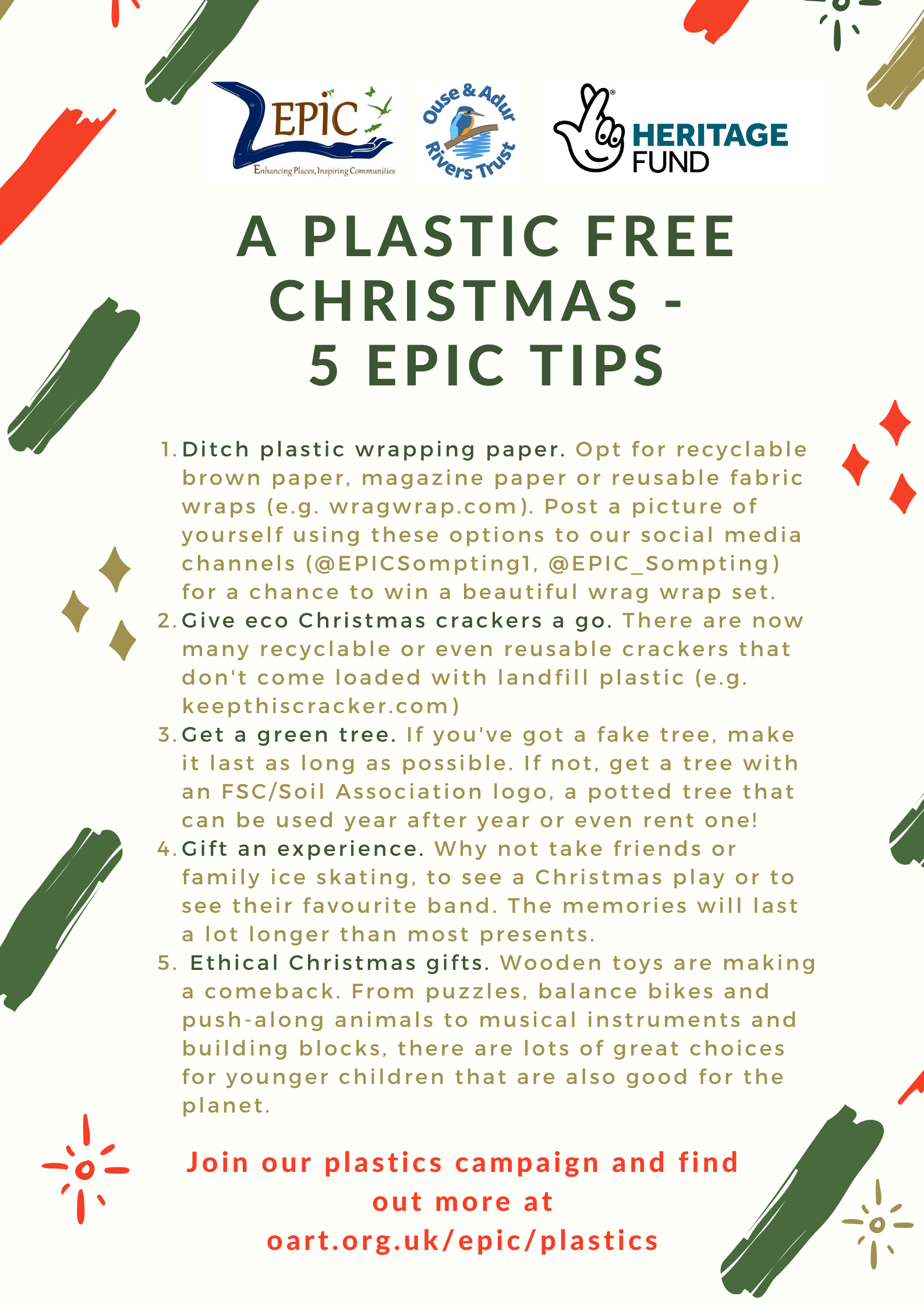 We really hope there is something for everyone and we want you to get involved, sign up to our mailing list to be kept informed of what is happening, where and when.